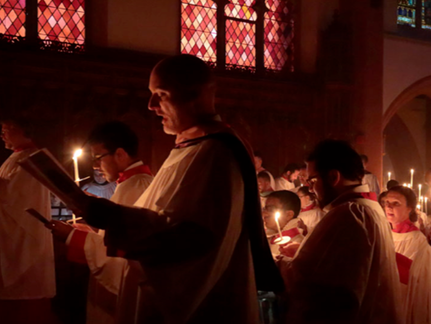 † A Service of Compline
Compline is a service to close the end of the day.
The service gives us an opportunity to give thanks for all that we have, our joys, our sorrows as well as prayer and confession. The service may be sung with psalms, hymns, and anthems of the day.

† Solemn Choral Evensong
The Choir of Ascension presents occasional services of Choral Evensong. A Solemn Evensong is almost always a Choral Evensong with incense, processions, psalms, anthems and hymns. This service dates back to the 16th century.

† A Festival of Nine Lessons & Carols
The Festival of Nine Lessons and Carols is a service of worship traditionally celebrated on or near Christmas Eve. The story foretells the fall of humanity, the promise of the Messiah, and the birth of Jesus. This story is told in nine short readings or lessons, with the singing of Christmas carols, hymns and choral anthems to round out the service.

The history of this service follows Nine Lessons and Carols from King's College in Cambridge England. The service was first televised by BBC Television in 1954 conducted by the director of music, Boris Ord. Since the Second World War, it has been estimated that each year there are millions of listeners worldwide who listen to the service live on Christmas Eve.